Last time we spoke with Brad Hodges of W.H. Bradford about how he got his start building bikes and his process for turning out beautiful custom machines. We’re back with Brad to learn more about the fun and retro “Island Hopper” touring bike he brought to NAHBS this year.

Whisky: Let’s get into some of the specifics about the bike that you brought to NAHBS this year. It’s a stunning bike. Was it for your or was it a client request?

Bradford: This is sort of a funny answer, but it’s totally true. The bike was built for a client—and you have to ask me who that client is.

Whisky: OK…who is the client?

Bradford: My dog, Winston. I built the bike and finished the trailer I had sitting around the shop so that we could do a summer tour together. When people at NAHBS asked me whose bike it was, I told them, ‘It’s my dog’s bike, and he only lets me ride it when I’m taking him out. 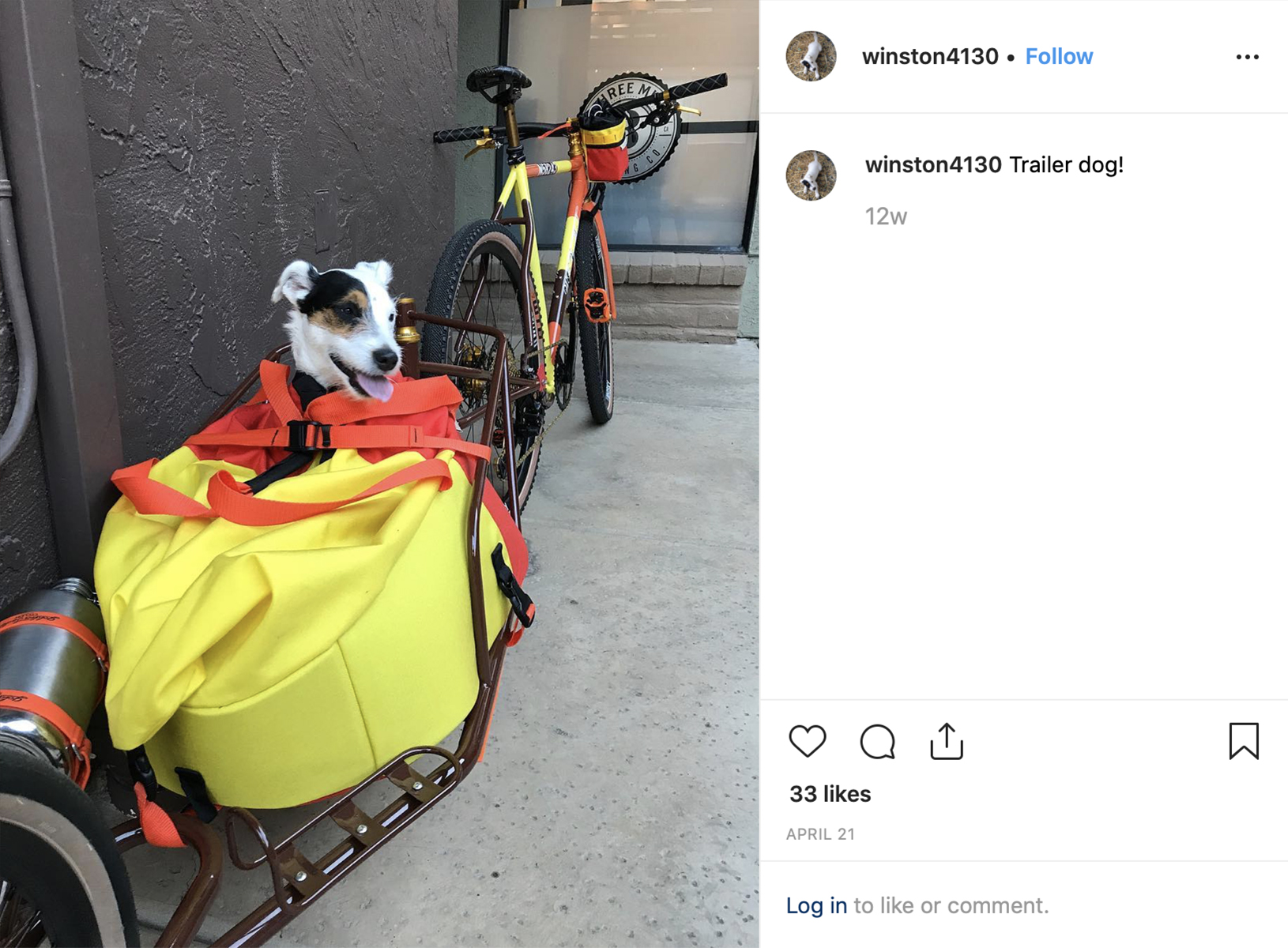 Whisky: What kind of dog is Winston?

Whisky: Do you often do themed bikes or is this just an idea that you decided to run with?

Bradford: It’s something I think I can say that I do often. A couple of years ago when I was running Nemesis Project, we were approached by Disney and I was contracted to build a bicycle specifically for Mickey Mouse. Right after that, we were contracted by the Kidrobot company to build a bike for the opening of their Miami store, which also tied in with Art Basel Miami Beach, so the bike I built was a display piece for Art Basel that year. For NAHBS one year we did Ty Hathaway’s modern retro clunker and then the next year I built the Yeti Ultimate tribute bike.

Whisky: Is there a special significance to Magnum, P.I. and T.C.? Or was that just something that you thought was cool? What’s the connection there for you?

Bradford: Being a kid who was babysat by ‘80s television, I really fell in love Magnum, P.I. and one of the most iconic paint schemes from that era was T.C.’s Island Hopper helicopter—I always thought the coloring on that chopper was awesome. But the tie-in was that I built this entire bike to take Winston touring around the San Juan Islands, and T.C.’s chopper was called the Island Hopper. So if you’re going to go island hopping with your dog, and you’re going to build a bike to go do that, there’s no better paint scheme you can use for that other than the original Island Hopper.

Whisky: Having you ridden the Island Hopper on a tour yet?

Bradford: Not yet, but for years I’ve wanted to go up to the San Juans and ride around the islands with Winston and check everything out. Winston often comes along on bike rides in my backpack. But on a longer tour that would kill my back and I really want to take him on this trip. You’re only riding 20 to 30 miles a day from state park to state park, and the islands aren’t that big. I figure that I can bring the trailer and put his dog bed in it and he can ride along with his head peeking out of the roll-top bag that Outer Shell made for it.

Whisky: Are there any other features that you added for the touring side of things? Braze-ons, bags? Anything to enable the touring and off-road capabilities of the bike?

Bradford: I did make the bike compatible with full fenders. Because the Whisky No.9 fork accepts fenders via great hidden fender mounts, I carried that over into the frame as well. There’s also an Outer Shell handlebar bag and trailer bag, and on the trailer I actually have two adventure cages so I can carry two full-size stainless-steel growlers for Winston’s water. They also opened a new brewery on Orcas Island at Friday Harbor, so I’ll be able to get beer.

Whisky: How did you go about designing a trailer? Was it a challenge compared to designing bikes?

Bradford: I originally built the trailer years ago. I used it on a trip up to Angel Island with some of my friends and it failed miserably—my friends still give me crap about how bad that trip was with this trailer. And the problem was that when you’re building a trailer, the head tube angle has to be forward-facing, and I didn’t get that at the time. I made the trailer with a 75-degree rear-facing head tube angle, which makes the trailer want to fall over. So the entire trip, my friends would hold the trailer up until I could get the momentum going to help the trailer right itself.

Fast forward to NAHBS preparation: I really wanted to finish the trailer, and during that process, I made a new towing fork that attaches the bike to the head tube of the trailer. I wasn’t thinking clearly that day and I made the fork forward-facing at a 75-degree angle, so when I fit the trailer to the frame, I realized the trailer still had a rear-facing 75-degree head angle. I got frustrated and basically cut the head tube and all of the mounting points off with a Dremel tool, then hand-filed the head angle to a forward-facing 75 degrees and welded in two new mounting points. I also added an integrated steering damper. 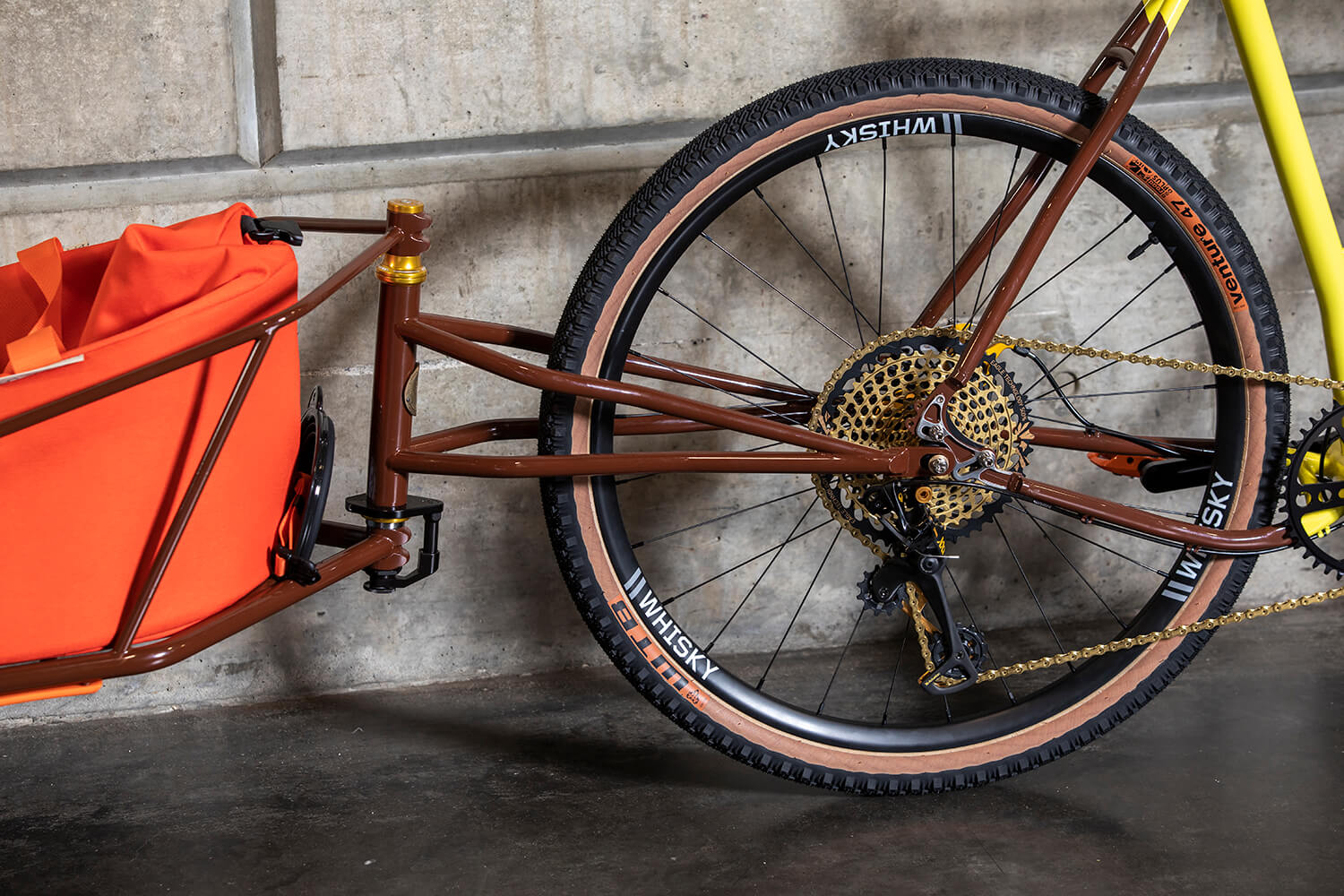 Whisky: What’s something that most people missed on this bike? Are there any hidden features?

Bradford: The bike has 100% titanium bolts on it for corrosion resistance. It also has its own thru-axle mounting standard for the trailer—it mounts to a custom-made Paul Components quick release that slides through the trailer mounting points and the dropouts, with a custom-machined bronze bushing between the trailer and dropout that allows it to move up and down as a pivot. There’s also a custom titanium safety bolt that threads onto the end of the quick release, which means it even meets CPC safety requirements for hauling a child.

Whisky: You have asymmetrical chainstays on the Island Hopper, which is uncommon among custom builders. What led you to that design?

Bradford: The dropped chainstay offers the ability to run a large chainring with wide tires, plus I was challenged by a friend who didn’t think a steel frame with asymmetrical chainstays could look good. I locked myself in my shop on Super Bowl Sunday and worked on that chainstay for hours. Originally, I was going to do a plate gusset behind the drivetrain and then have a tube swoop down and weld it to the back side of the plate. But in the process of fitting the tube to the plate, I bent the tube so that it actually took up the distance where the plate gusset would have been and it just mated up perfectly. I think it ended up looking amazing.

Whisky: Thanks again to Brad Hodges from W.H. Bradford Designs for talking us through this awesome build. Check back here soon for more beautiful bikes in the Whisky Select series.